A media mogul, a pop superstar and a television competition judge were among the biggest movers and shakers making waves in Los Angeles’ high-end real estate market in August. Here’s a closer look at the most expensive homes sold last month in L.A. County.

Quibi founder Jeffrey Katzenberg sold his estate on Loma Vista Drive to a limited liability company in a deal completed off market.

Katzenberg purchased the six-acre estate in 2009 for $30 million and had a 26,000-square-foot home built on the site. Completed in 2012, the U-shaped house is approached by a tree-lined driveway that ends at a large motor court. Layers of gardens, lawn and mature trees unfold around the property, which overlooks the historic Greystone Mansion.

Kurt Rappaport of Westside Estate Agency handled both ends of the deal.

Real estate agent Christopher Cortazzo pulled up anchor in Malibu, selling his bluff-top home on Cliffside Drive to a corporate entity in a deal completed off market.

Cortazzo bought the property in 2017 from the estate of late Hollywood talent agent Stanley Kamen for $17.1 million. Located in the Point Dume area, the oceanfront property encompasses more than an acre of grounds and has direct beach access. The original home, a Mediterranean villa dating from 1966, was razed after Cortazzo’s 2017 purchase.

Cortazzo, an agent with Compass, represented himself in the deal. Rappaport represented the buyer.

Newlyweds Justin Bieber and Hailey Baldwin made a major upgrade to their marital home, paying $16.2 million less than the original asking price for a mansion behind the gates of Beverly Park.

The couple’s new place has nearly 11,000 square feet of interior space, a tennis court and a swimming pool. A two-story entry with checkerboard marble tile kicks off the residence. Seven bedrooms, 10 bathrooms, a movie theater and a gym with mirrored walls fill out the floor plan.

The couple were previously living in an updated Monterey Colonial-style home in the Beverly Hills area.

A newly built home on Fordyce Road sold to a trust for the highest price in the Westside neighborhood this year.

Behind the gates of Brentwood Circle, the Mediterranean-inspired showplace was Brentwood’s fourth sale north of $20 million this year and the most expensive transaction since last summer when musician Lindsey Buckingham sold his place for $28 million.

Designed by architect William Hefner, the 9,300-square-foot home has a glass-walled entry, a vaulted-ceiling living room and a kitchen clad in marble and oak. Walls of windows bring light into the formal areas, while bi-folding doors in the family room open to a massive loggia with a fireplace and dining area.

The five-bedroom, seven-bathroom house sits on a 1.77-acre lot with lawn and landscaping. Elsewhere on the grounds is a swimming pool and sun deck.

Before breaking his back in a scooter accident, Simon Cowell was making a break to the bank after selling his home on North Palm Drive in an off-market deal.

The “America’s Got Talent” creator and judge saw quite a return on investment in the sale. Records show he bought the property in 2004 for $8 million.

The traditional-style house was extensively updated during Cowell’s ownership and features more than 9,300 square feet of living space filled with white walls and black accents. The two-story floor plan includes a gym, spa facilities and a solarium. An exterior cabana is outfitted with a retractable roof.

The house sits on more than three-quarters of an acre with a lap swimming pool, lawn and landscaping.

Olympic committee organizer Casey Wasserman, who in June sold his Beverly Hills estate to David Geffen, paid $1.4 million less than the asking price for an ultramodern home on Robin Drive.

Designed by Xten Architecture and completed this year, the 12,000-square-foot showplace is museum-like with its gallery walls and sparsely decorated living spaces. Box-like ceilings inspired by Stanley Kubrick’s “2001: A Space Odyssey” lend a futuristic vibe to the home.

In addition to five bedrooms and seven bathrooms, the house includes a movie theater, a gym and a lounge with a wet bar. The lower-level gym takes in canyon views.

Outside, the half-acre property holds a swimming pool, a spa and a landscaped courtyard. There’s also a subterranean eight-car garage.

Mon Sep 21 , 2020
Photo credit: David Redfern From ELLE Decor I was three months pregnant when I first visited Nina Simone’s childhood home in Tryon, North Carolina, a tiny town in the foothills of the Blue Ridge Mountains. Even before I entered 30 East Livingston Street, I was struck by how dilapidated the […] 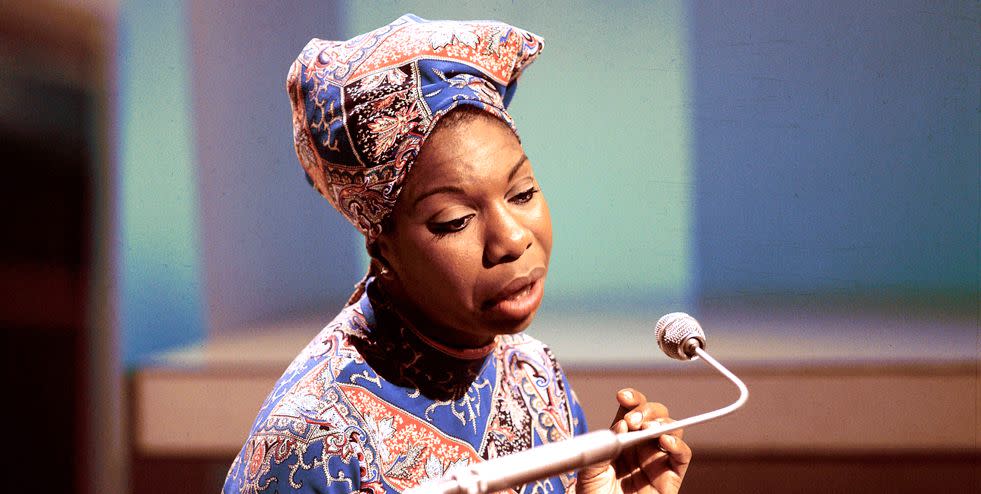