Carrie Underwood might be known for her strong, defined legs (aside from her superstar vocal talents, of course), but that doesn’t mean she’s slacking when it comes to working out her upper body. After taking home a trophy at this month’s Academy of Country Music (ACM) Awards, the country singer posed proudly with her new hardware, showing off her sculpted, strong arms in the process. And let’s be very clear: Underwood’s stand-out strength and muscle definition are the products of some seriously hard work.

Just take it from her longtime trainer, Eve Overland, who says the duo work out together almost daily (!!) when Underwood is on tour or prepping for her upcoming Las Vegas residency, as she is now. “[We] have a laugh when we say we like to focus on ‘vanity muscles’ [e.g. biceps and shoulders] — muscle groups that pop and are show-stopping when she is on stage performing or on the red carpet,” says Overland. “Carrie has always been celebrated for her noteworthy legs. But as her trainer (and friend) I get so much joy when people notice how sculpted and strong her arms are as well. She is the complete package.”

And that’s due largely to the 39-year-old’s “positive mindset when it comes to working out and her goals,” says Overland. Not only does Underwood put in the time to work those aforementioned “vanity muscles” (own it!), but she also focuses on strength and mobility “so she can keep up with her boys and do what she loves to do for as long as possible,” adds Overland. “She’s also always up for a challenge and loves to push her body. She continues to grow by trying new things and practices until it is mastered. She never ceases to amaze me.” (Read more: Carrie Underwood Says Setting This One Workout Goal Helps Her Feel Her Best)

Underwood’s upper-body workout is intense, with the singer tackling a series of supersets (two exercises back to back with little to no rest — typically targetting the same muscle group to maximize fatigue) and trisets (three exercises, same method). She’ll perform two or three rounds of each, nailing multiple reps of each move. “This workout targets the major muscle groups of the upper body — e.g. the back, chest, shoulders, biceps, and triceps,” explains Overland. “I like to mix it up by incorporating traditional as well as non-conventional lifts, skill work, and anti-rotational exercises as well as functional movements so there’s a mixture of strength, power, and stability within one workout. It’s fun as well as challenging — in a good way.”

Just reading that might make you feel sweaty — and ready to move! — so, if you want to tackle Underwood’s workout for yourself, be prepared to really max out your muscles. If you’re new to fitness or think you’re not quite at Underwood’s level, there are a few ways you can modify the routine. “You can decrease the amount of weight used or decrease the reps; you can perform one round of each set, instead of two or three as noted; or you can choose one exercise in each set to perform and really focus on form and technique,” notes Overland.

Now the moment you’ve all been waiting for: Time to grab those dumbbells and get going!

How it works: Perform each triset once, matching the indicated number of rounds and reps.

You’ll need: A set of dumbbells, a bench or sturdy surface, resistance bands, and a pull-up bar (or, if you don’t have the latter, you can modify at home).

A. Stand directly below a pull-up bar.

B. Reach arms overhead and grab the bar with an overhand grip so that hands are slightly further than shoulder-width apart and palms are facing away from body. Focus on breath, pull belly button toward spine to engage core, keeping shoulders back and down.

C. Pull elbows down and back, using arms to lift off feet off the floor. Continue to pull upper body upward until chin is over the bar.

D. Avoid swinging or swaying body and keep shoulder blades back and down; lower with control.

A. With bent knees and back hinged forward and straight (but not arched), hold one dumbbell in each hand with an underhand grip (palms facing up).

B. With elbows tucked firmly by side, lift dumbbells at a 45-degree angle. Pause at top to squeeze shoulder blades together.

C. Lower dumbbells at a 45-degree angle while maintaining control.

A. In push-up position with dumbells in both hands.

B. Engage core and upper body and raise left embold straight toward ceiling, pulling dumbell up by side of torso.

C. Slowly lower (avoid slamming weight down on the ground) to starting position. Repeat on opposite side to complete one rep.

A. Lie flat on back with dumbbells on either side of body.

C. Keep one dumbell raised and slowly lower the other dumbell, rotating wrist so that palm faces toward body and elbow is just above the floor.

D. Raise dumbell back up above chest, rotating wrist so palm faces forward. Alternate and repeat on other side.

A. In a high plank position with wrists under shoulders and feet hip-width apart, brace abs and bend elbows to slowly lower chest toward ground. (Elbows should point behind body.)

B. Once chest grazes floor, push back up to starting position.

C. Tap each hand to its opposite shoulder before lowering back to the ground in another push-up.

Do as many reps as possible for 30 seconds, rest 10 seconds.

A. Begin in an upright seated position on a bench with hands next to thighs. Walk feet out about 6 inches and extend legs, keeping butt off the bench and arms extended straight.

B. Hinge at elbows and lower body until arms make a 90-degree angle.

C. Push back up through palms to return to bench level.

Do as many reps as possible for 30 seconds, rest 60 seconds.

A. Stand with feet shoulder-width apart, knees soft, and core engaged. Hold a dumbell in each hand at shoulder height, just outside of shoulders with palms facing forward and elbows pointing down.

B. Simultaneously lower into a squat and lift both dumbbells directly upward, keeping feet firmly planted on the floor.

C. Press through feet to stand back up while simultaneously lowering weights to shoulder level. That’s one rep. (See also: 10 Ways to Do Squats with Weights)

A. Standing with feet shoulder-width apart, hold a single dumbbell with both hands and perch it on one shoulder with elbows pointing downward.

B. Extend arms and push dumbell up and overhead.

C. Bend elbows and slowly lower weight to opposite shoulder.

B. Pike hips so that body forms an inverted V, keeping back flat, shoulders down, and toes flexed. Knees should remain unlocked.

C. Keeping legs straight, lower hips and bend arms so that chest nearly grazes the floor as it glides in between hands.

D. Curve back and straighten arms, so that face looks forward and hips hover just above floor. Reverse direction, pushing hips back up into an inverted V.

Perform 2 rounds of each move, completing each exercise for the indicated number of reps.

A. Stand with feet shoulder-width apart, holding dumbells in front of body at chest level.

B. Raise the dumbbells above head until arms are stretched out straight.

C. Slowly lower weights back behind head parallel to the floor without moving upper arms or flaring elbows out.

A. Place feet shoulder-wdith distance apart in the middle of a resistance band. Hold the ends of the band in both hands around hip-level; make sure thumbs point outward.

B. With hands shoulder-width apart, curl up, keeping elbows close to the side of body while resisting resist against the pull of the band.

A. Hold two dumbbells at shoulder height with an underhand grip, standing with feet shoulder-width apart.

B. Using a “fighting stance,” punch upwards with one arm and pivot on the same foot. Make sure to engage core as well as upper- and lower-body.

C. Return to starting position and repeat on the other side.

AMRAP (as many reps as possible) 30 seconds, rest 60 seconds.

Sales of single-family homes recorded in Sonoma County for the week of Feb. 6 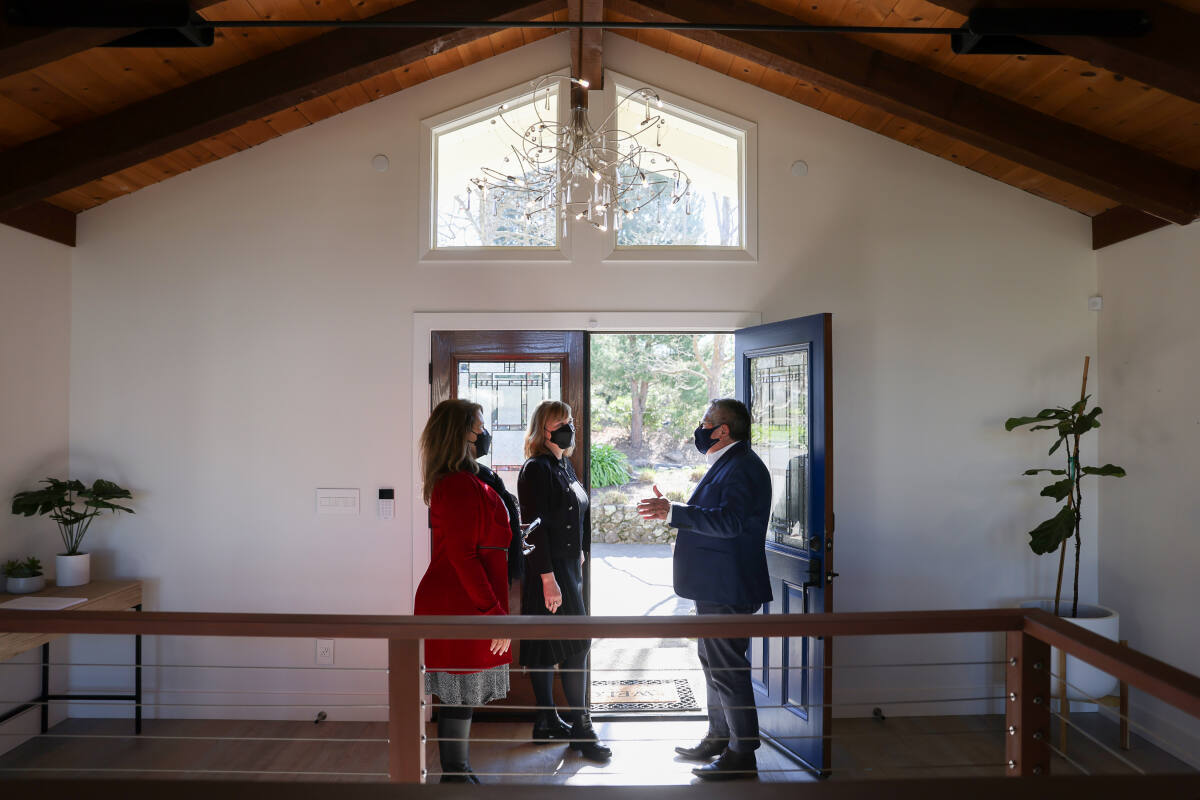