A man who was accused of breaking into a woman’s East Hartford home and choking her to unconsciousness pleaded guilty this week only to a gun offense and is expected to receive a three-year prison sentence followed by three years’ special parole, his lawyer says.

Nathaniel Noah Weaver, 33, who has listed an address on O’Connell Drive in East Hartford, pleaded guilty in Hartford Superior Court to criminal possession of a firearm in the incident, which occurred Oct. 17, 2020.

The original charges against Weaver included home invasion, which carries 10 to 25 years in prison, as well as felony counts of second-degree strangulation, first-degree unlawful restraint, and four counts of risk of injury to a child.

“The charges were initially serious, but we were able to show the court that he actually lived at the address,” defense lawyer Michael L. Chambers Jr. said. He explained that a person can’t burglarize or invade a home where he lives.

The woman told police Weaver didn’t live with her.

Her vividly detailed description of the incident is recited in an affidavit by East Hartford police Officer Lawrence W. Henrickson. But the officer also reported that she declined to give a detailed written statement, expressing fear for her safety.

DEFENDANT: NATHANIEL NOAH WEAVER, 33, WHO HAS LISTED AN ADDRESS ON O’CONNELL DRIVE IN EAST HARTFORD

NOT PURSUED: HOME INVASION, STRANGULATION, AND NUMEROUS OTHER CHARGES

Weaver remains an inmate at the MacDougall-Walker Correctional Institution in Suffield, held in lieu of $750,000 bond pending his sentencing, set for Dec. 14.

Gun offenses aren’t considered violent crimes under Connecticut law, and people convicted of non-violent crimes are ordinarily eligible for parole after serving half their prison time, which would be 18 months in Weaver’s case.

But he is on special parole in an old case, online state Department of Correction records show, which may complicate his situation.

Henrickson reported he was dispatched to the home after police received a report of a burglary in progress. He said a man answered the door but, when a woman’s voice told him to let the officer in, he slammed the door and locked it.

After kicking in the front door, Henrickson searched the first floor and found the back door open and a handgun on the kitchen table.

The officer reported that he spoke to the woman, who was on the second floor, and she described the incident as follows: She said Weaver had called her earlier in the night, sounding intoxicated, and asked whether she had another man in the house. She said she told him no one was with her and hung up.

The woman said she was awakened later by someone pounding on an exterior door. When she got downstairs, she said, she heard Weaver yelling from outside, heard glass breaking, then saw Weaver climbing in through a broken bathroom window.

She said she ran toward the stairs with Weaver chasing her and yelled to someone in a first-floor bedroom to call police.

The woman said she made it to her bedroom but Weaver cornered her next to the bed and shoved her into the wall while choking her with his hands. She said she thought she lost consciousness, then regained it when police were knocking on the door.

Henrickson reported he couldn’t see marks on the woman’s neck but did see a damaged lampshade on the bedside table.

Wed Oct 20 , 2021
What are the features you’re looking for in a dream home? Is it a light-filled open kitchen for cooking and entertaining, a spacious walk-in closet for storing your clothing or a en-suite with double sinks? In Casa Grande, take a tour of new homes at Palm Creek Resort & Residences. […] 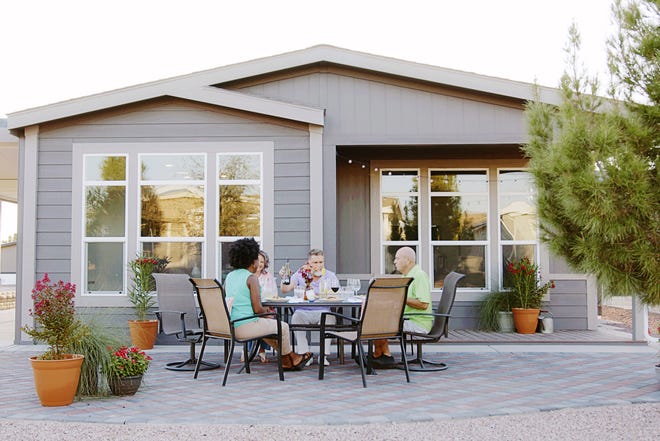